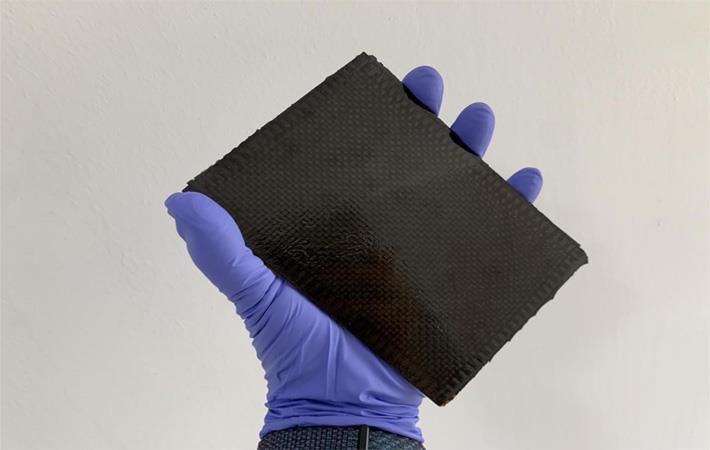 Pic: eurekalert
Scientists at Korea Institute of Science and Technology (KIST) have developed a flame-retardant carbon-fibre-reinforced composite material using plant-originated tannic acid. The team has also come out with a process for eco-friendly recycling of the material, which is widely used in aerospace, automotive, shipbuilding, and sports equipment industries.

Carbon-fibre-reinforced composite material or carbon fibre-reinforced plastic (CFRP) is a composite material that contains carbon fibre, and is about four times lighter than steel yet 10 times stronger. It is widely used in the aerospace, automotive, shipbuilding, and sports equipment industries. Structurally, CFRP is made up of carbon fibre and epoxy resin, which serve functions in this composite material similar to the respective roles that reinforcing rods and cement play in concrete structures. To achieve mechanical rigidity, the binding of carbon fibre and epoxy resin in CFRP must be strong. Moreover, CFRP must be fire-safe as it is put to several uses such as a construction material. To induce these traits in CFRP, sometimes it is synthesised with additives.

Due to its susceptibility to heat, CFRP had been made fire-safe by adding a halogen flame-retardant. However, the use of halogen in CFRP has been banned worldwide, because it generates toxic substances when incinerated for recycling.

Jung Yong-chae, head researcher at KIST's Institute of Advanced Composite Materials, and his team sought to improve the mechanical rigidity and flame-retardance of CFRP with tannic acid, an eco-friendly substance. Tannic acid characteristically bonds strongly with carbon fibre. It also turns into charcoal when burned. Charred tannic acid functions as a barrier that blocks the inflow of external oxygen. By manufacturing epoxy resin from tannic acid and mixing it into carbon fibre, the KIST research team successfully developed a CFRP that is strong and flame-retardant.

Unlike conventional epoxy resin that is vulnerable to heat, epoxy resin made from tannic acid is flame-retardant and needs no additives. This means that the toxic substances generated when incinerating CFRP for recycling would no longer be a problem. Also, because conventional CFRP when burned decreased the performance of its epoxy resin, precluding complete recycling, the research team came up with a new recycling method.

By dissolving CFRP in water in a supercritical fluid state - ie temperature and pressure over a set level - over 99 per cent of the CFRP could be recovered without reduced carbon fibre performance. It was also found that epoxy resin when dissolved produced a substance called "carbon dots," which can be used as an electronic material (Optronics, Sensing, Bioimaging etc). Unlike the method of recycling by incineration, which burns up epoxy resin leaving only the incomplete carbon fibre to be recycled, this new method of recycling enables the recycling of all components of a composite material.

Scientists at Korea Institute of Science and Technology (KIST) have developed a flame-retardant carbon-fibre-reinforced composite material using plant-originated tannic acid. The team has also come out with a process for eco-friendly recycling of the material, which is widely used in aerospace, automotive, shipbuilding, and sports equipment industries.
Composites