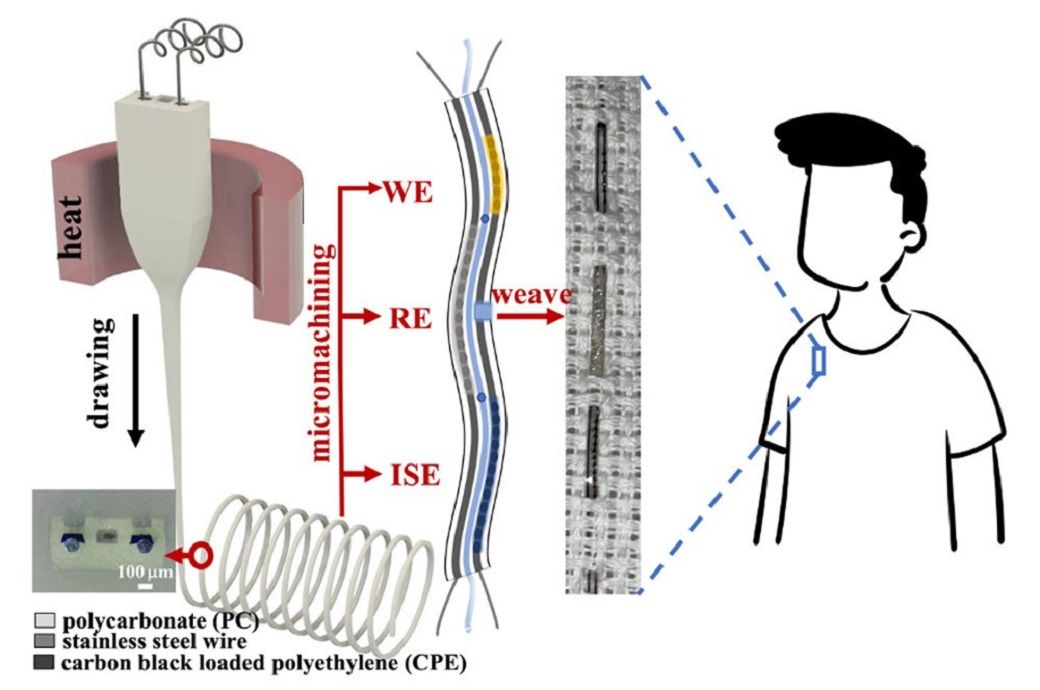 Pic: Tohoku University
A team of researchers led by assistant professor Dr Yuanyuan Guo from Japan’s Tohoku University's Frontier Research Institute for Interdisciplinary Sciences has developed a microelectronic fibre with microscopic parameters that is capable of analysing electrolytes and metabolites in sweat. The fibre’s micrometre scale allows it to be woven into clothes for healthcare applications.

The fibre could lead to fibre-based smart clothes that provide greater versatility in functions, larger sensing areas, and greater comfort. The team believes that their developed smart fabric could revolutionise the textile and healthcare industries, benefiting human society at large, according to a press release by Tohoku University.

A researchers' team led by Dr Yuanyuan Guo from Japan's Tohoku University's Frontier Research Institute for Interdisciplinary Sciences has developed a microelectronic fibre with microscopic parameters that is capable of analysing electrolytes and metabolites in sweat. The fibre's micrometre scale allows it to be woven into clothes for healthcare use.

To produce the fibre, the group leveraged the versatile thermal drawing process, where heat is applied to draw out micro-structured fibre from its macroscopic preform. The team also patterned on two sensing electrodes for sodium and uric acid on the longitudinal surface of the fibre.

Although mainstream photolithography and printing technology have enabled wearable electronics, doing so often entails attaching fairly rigid electronic patches to existing fabrics or directly on the skin, leading to only a small area of the body being covered.

Smart fabrics allow for the seamless integration of electronics, optics, biosensors, and mechanics into a thin strand of fibre that is intrinsically flexible and as thin as a human hair. These fabrics can then be used to monitor vital physiological signals related to our mental and physical health status.

"Since most developments so far could not be considered clothes, we devoted our effort to transforming fibre, to make truly wearable smart fabric.”

Graduate student Jingxuan Wu was the leading author of the research work, and it was published in Analytical and Bioanalytical Chemistry on January 9, 2023.