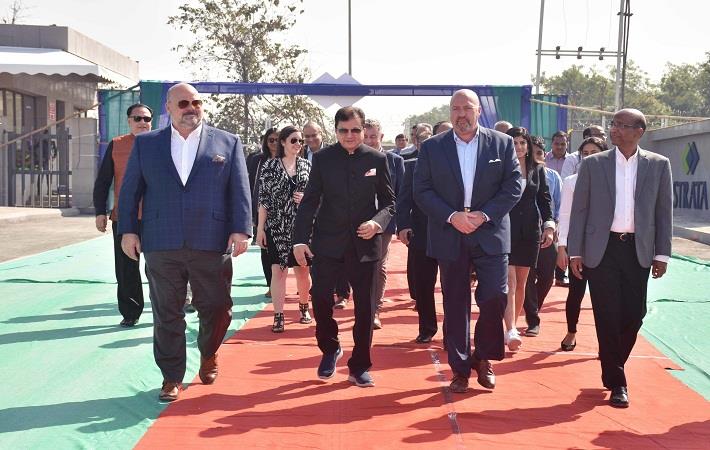 Courtesy: Strata Geosystems
Strata Geosystems, a global leader in the soil reinforcement industry, opened a new manufacturing facility on February 11, 2019 in India to meet the growing demand for geotechnical products in India and abroad. The plant was constructed using Strata’s own technical textiles for flooring, internal roads, water-proofing, etc, proving the products’ benefits.

The inauguration of the plant is a milestone for India’s technical textile sector and a symbol of Strata’s continued global expansion, according to a media release by Strata. This new facility also aligns with the efforts of The ministry of textiles towards the promotion of technical textiles in critical infrastructure applications. Strata had the honour of hosting its joint-venture partners from Glen Raven, Inc, a global performance-textile company headquartered in the US, at the opening ceremony of the company’s new manufacturing facility located in Daheli, Gujarat. Among Glen Raven’s attendees were CEO Leib Oehmig and Harold Hill, president of the technical fabrics division.

Further reiterating its commitment to India and Prime Minister Modi’s ‘Make in India’ vision, this new facility is the largest geogrid plant and will provide sufficient capacity to cater to India’s demand while continuing to strengthen existing export markets. The plant enables the production of the widest geogrid, high-strength uniaxial and biaxial geogrids, and improved technical parameters like enhanced stress strain values. Additionally, the facility, located over 10 acres, houses an exclusive, custom-built coating machine, efficient material handling capabilities, and an advanced laboratory which will be accredited with global standards.

“We are indeed a truly unique company,” said Ashok Bhawnani, founding director of Strata Geosystems. “As the largest reinforced soil wall builder in India, we differentiate ourselves by using re-engineered yarn to build high-performance structures for highways.”

“Using geogrids to reinforce soil is analogous to using steel for concrete reinforcement, and this technology is being used for a wide range of applications including ramp construction, landfills, mining dykes, and other engineered structures,” said Narendra Dalmia, CEO & director, Strata.

“This is a tremendous milestone for the entire Strata global organisation,” said Hill. “It’s an occasion that has been many years in the making, and it’s only been possible through the hard work and steadfast dedication of our team here in India. We, at Glen Raven, could not be more proud of our partners in India - they are top-notch professionals, and even better people. We couldn’t ask for better partners,” said Oehmig.

Strata began as a manufacturer of geogrids in 2004 and has evolved to become both a manufacturer and India’s largest developer for reinforced soil structures. Today, Strata has built over 400 bridge ramps on national highways across the country and is a leader in the technical textiles industry. Reinforced soil technology has been adapted across the country, which led the company to expand its capacity and more effectively cater to the growing infrastructure needs in India. (PC)