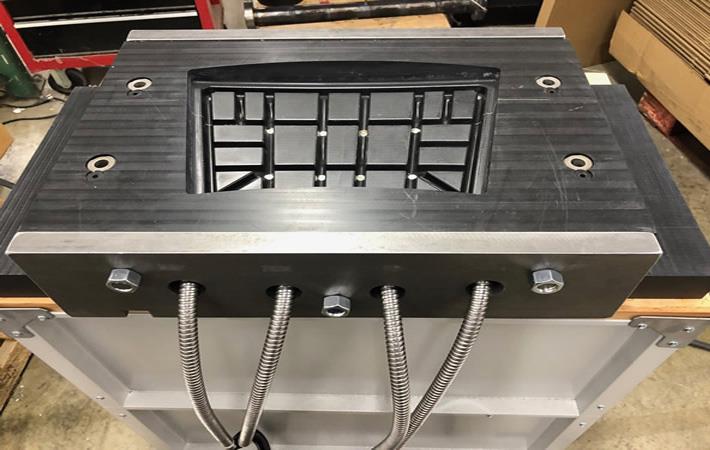 The test part, a half scale thrust reverser blocker door for a jet engine, was designed at Purdue and is approximately 10x13x2 inch in size. The two-part matched compression mold for the part was 3D printed using Techmer PM 25 per cent carbon fibre reinforced PESU at Thermwood, using its LSAM large scale additive manufacturing system.

The mold halves were then machined to final size and shape on the same system. The completed tool was taken to Purdue’s Composite Manufacturing & Simulation Centre, in West Lafayette Indiana, where it was mounted to their 250 ton compression press. Parts were then molded from Dow’s new Vorafuse prepreg platelet material system with over 50 per cent carbon fibre volume fraction.

Both halves of the mold were printed at the same time during a single 2 hour and 34 minute print cycle. When using Thermwood’s “continuous cooling” print process, the polymer cooling determines the cycle time for each layer, allowing both halves to be printed in the same time it would take to print one half (since both parts could be printed in the layer cooling time available).

Machining, however, must be done in the traditional manner, one part at a time, although there is an advantage to machining printed parts. Since the part is printed to near net shape, the overall amount of material that must be removed is significantly less than if the tool was machined from a solid block. Machining of the two mold halves required an additional 27 hours.

The first attempt at compression molding was not successful, but techniques were developed to account for the mechanical and thermal conductivity characteristics of the polymer print material and a second attempt produced acceptable parts.

The team determined that using printed composite molds in a compression press does require a significantly different approach than a tool for the same part machined from a block of metal. First, the tool must be internally heated since the polymer composite doesn’t transmit heat as well as metal. Thermwood developed a technique for deep hole boring of the printed composite part using the trim head on its LSAM machine, allowing the deep insertion of cartridge heaters.

A special heat control allows the temperature of various areas of the tool to be controlled independently, helping address the challenge of balancing the thermal characteristics of the thermoplastic composite mold with the processing temperature requirements of the thermoset material being processed.

Also, the outside of the mold must be reinforced so that the composite polymer used for the mold itself is under only compression loads and not tension during the molding operation, since forces developed during molding are greater than the tensile strength of the composite polymers used for the mold. This approach has successfully withstood molding pressure of 1,500 PSI during initial testing and the team believes even higher pressures are possible.

Both Thermwood and Purdue believe this is an important first step in bringing additive manufacturing to compression molding. The speed and relatively low cost of printed compression tools has the potential to significantly modify current industry practices. Printed tools are ideal for prototyping and can potentially avoid problems with long lead time, expensive production tools by validating the design before a final version is built.

Potential applications in the auto industry include prototyping and production tool verification. Because of high volume requirements for auto production, it is unlikely that these tools would function adequately for full production use, but actual useful production life is still unknown. It will require additional testing to determine just how many parts can be molded from an additive manufactured compression mold and what the ultimate failure mode actually is.

In aerospace, parts tend to be much larger and production volumes much lower, so it is possible that printed compression molds could find actual production use for larger, lower volume aerospace components, perhaps replacing open face tools and autoclaves for certain parts.

Propex Furnishing & Ocean State to distribute composites in the US
Composites

Teijin, Veolia to use waste heat