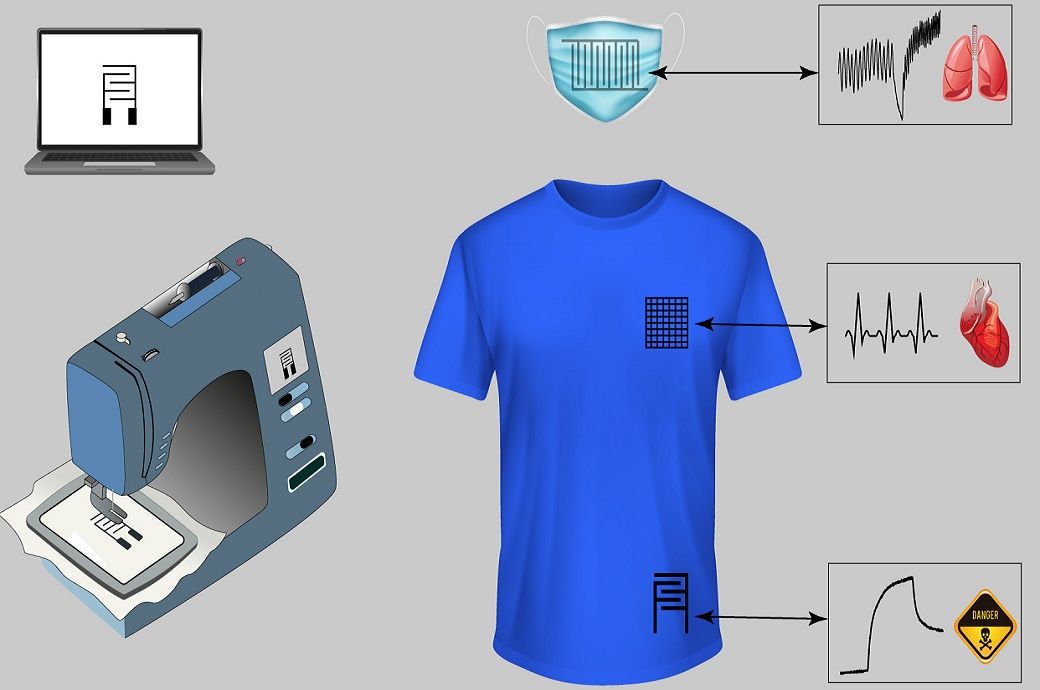 Spun from a new Imperial-developed cotton-based conductive thread called Pecotex, the sensors cost little to manufacture, according to a press release by the Imperial College London. Just $0.15 produces a metre of thread to seamlessly integrate more than ten sensors into clothing, and Pecotex is compatible with industry-standard computerised embroidery machines.

UK researchers have embedded new low-cost sensors that monitor breathing, heart rate, and ammonia into T-shirts and face masks. Potential applications range from monitoring exercise, sleep, and stress to diagnosing and monitoring disease through breath and vital signs. Just $0.15 produces a metre of thread to integrate over ten sensors into clothing.

“The flexible medium of clothing means our sensors have a wide range of applications. They’re also relatively easy to produce which means we could scale up manufacturing and usher in a new generation of wearables in clothing,” said first author of the research Fahad Alshabouna, PhD candidate at Imperial’s Department of Bioengineering.

The research team embroidered the sensors into a face mask to monitor breathing, a T-shirt to monitor heart activity, and textiles to monitor gases like ammonia, a component of the breath that can be used to track liver and kidney function. The ammonia sensors were developed to test whether gas sensors could also be manufactured using embroidery.

“We demonstrated applications in monitoring cardiac activity and breathing, and sensing gases. Future potential applications include diagnosing and monitoring disease and treatment, monitoring the body during exercise, sleep, and stress, and use in batteries, heaters, anti-static clothing,” Alshabouna added.

Wearable sensors, like those on smartwatches, let us continuously monitor our health and wellbeing non-invasively. Until now, however, there has been a lack of suitable conductive threads, which explains why wearable sensors seamlessly integrated into clothing aren’t yet widely available, added the release.

Developed and spun into sensors by Imperial researchers, the material Pecotex is machine washable, and is less breakable and more electrically conductive than commercially available silver-based conductive threads, meaning more layers can be added to create complex types of sensors.

“Pecotex is high-performing, strong, and adaptable to different needs. It’s readily scalable, meaning we can produce large volumes inexpensively using both domestic and industrial computerised embroidery machines. Our research opens up exciting possibilities for wearable sensors in everyday clothing. By monitoring breathing, heart rate, and gases, they can already be seamlessly integrated, and might even be able to help diagnose and monitor treatments of disease in the future,” said lead author Dr Firat Guder, Department of Bioengineering.

Next, the researchers will explore new application areas like energy storage, energy harvesting, and biochemical sensing, as well as finding partners for commercialisation.

This study was funded by the Saudi Ministry of Education, Engineering, and Physical Sciences Research Council (EPSRC, part of the UKRI), Cytiva, Imperial’s Department of Bioengineering, Bill and Melinda Gates Foundation, and the US Army. The research has been published in Materials Today.