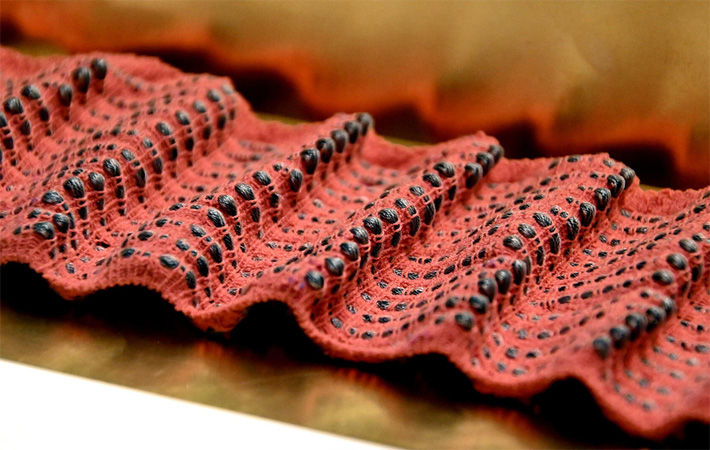 Such fabrics, the team suggests, could be used in garments that help train singers or athletes to better control their breathing, or that help patients recovering from disease or surgery to recover their breathing patterns, according to an MIT news release.

The multilayered fibres, called OmniFibres, contain a fluid channel at the centre, which can be activated by a fluidic system, which controls the fibres’ geometry by pressurising and releasing a fluid medium, such as compressed air or water, into the channel, allowing the fibre to act as an artificial muscle.

Researchers from the US Massachusetts Institute of Technology, the MIT Media Lab at Sweden's Uppsala University and the Swedish KTH Royal Institute of Technology have developed a fibre that can be used in apparel to sense how much it is being stretched or compressed. It offers immediate tactile feedback in the form of pressure, lateral stretch or vibration.

The fibres also contain stretchable sensors that can detect and measure the degree of their stretching. The resulting composite fibres are thin and flexible enough to be sewn, woven, or knitted using standard commercial machines.

The research was presented recently at the Association for Computing Machinery’s User Interface Software and Technology online conference in a paper by Ozgun Kilic Afsar, a visiting doctoral student and research affiliate at MIT; Hiroshi Ishii, the Jerome B. Wiesner Professor of Media Arts and Sciences; and eight others from the MIT Media Lab, Uppsala University, and KTH Royal Institute of Technology in Sweden.

The new fiber architecture has a number of key features. Its extremely narrow size and use of inexpensive material make it relatively easy to structure the fibers into a variety of fabric forms. It is also compatible with human skin, since its outer layer is based on a material similar to common polyester.

And, its fast response time and the strength and variety of the forces it can impart allow for a rapid feedback system for training or remote communications using haptics (based on the sense of touch).

Afsar says that the shortcomings of most existing artificial muscle fibers are that they are either thermally activated, which can cause overheating when used in contact with human skin, or they have low-power efficiency or arduous training processes. These systems often have slow response and recovery times, limiting their immediate usability in applications that require rapid feedback, she says.

As an initial test application of the material, the team made a type of undergarment that singers can wear to monitor and play back the movement of respiratory muscles, to later provide kinesthetic feedback through the same garment to encourage optimal posture and breathing patterns for the desired vocal performance.

Though this initial testing is in the context of vocal pedagogy, the same approach could be used to help athletes to learn how best to control their breathing in a given situation, based on monitoring accomplished athletes as they carry out various activities and stimulating the muscle groups that are in action, Afsar says.

Eventually, the hope is that such garments could also be used to help patients regain healthy breathing patterns after major surgery or a respiratory disease such as COVID-19, or even as an alternative treatment for sleep apnea.

Afsar plans to continue working on making the whole system, including its control electronics and compressed air supply, even more miniaturized to keep it as unobtrusive as possible, and to develop the manufacturing system to be able to produce longer filaments.

The research was supported by the Swedish Foundation for Strategic Research.