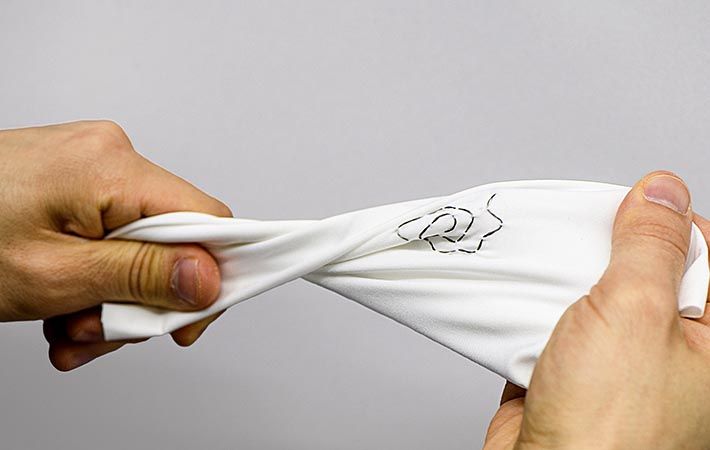 Pic: Purdue University photo/Rebecca McElhoe
FlexiLab at Purdue University is trying to make the Internet of Things more practical for everyday use by addressing the limitations which have prevented it from growing in home environments. The aim is to develop seamless communication between humans, machines and household items. For example, FlexiLab is printing electronics the way newspapers are printed.

Led by Purdue University engineer Ramses Martinez, the FlexiLab has already come out with innovations such as the ones which allow any paper notebook to be used as a tablet, change of the volume of music just by touching one’s clothes, and disposable smart bandages which monitor and heal the wound.

“The goal is to have seamless communication between humans, machines and household items in the near future,” said Martinez, an expert in cyberphysical interaction and a Purdue assistant professor of industrial engineering and biomedical engineering.

That communication isn’t seamless if a smart object costs too much or gets in the way of a routine rather than simplifying it – problems that have so far barred the Internet of Things from growing in home environments.

Electronic clothing could be a pain if it required taking the battery and electronics out to wash the garment, a paper keyboard isn’t any good if it degrades with use, and no one would buy wound-healing bandages if they’re significantly more expensive than ordinary bandages, the university said. To address these challenges and make communication with traditionally non-electronic objects as seamless as with a smartphone, the FlexiLab is rethinking how the technology is manufactured.

Augmenting the functionality of household items requires embedding circuits that can not be seen into their structure. But to keep these items affordable, their fabrication process also needs to be easy to mass produce using existing manufacturing methods.

“Every time my group works on the development of a new material, we focus on how to make its fabrication simple,” Martinez said. “One of the most inexpensive things that can be fabricated in large quantities at high speed is newspapers, so we use a similar manufacturing technique to print electronics.”

Printing materials like newspapers allows them to be more flexible and smoother. Using this technique, Martinez’s lab spray paints or stencils arrays of sensors onto paper-like materials and then integrates them with other components to build technology such as wound-tracking bandages or paper keyboards.

Other materials that Martinez has developed, such as conductive silk, are threaded through a conventional sewing machine to create embroidered patterns and circuits on any textile or cloth, which enables features such as wireless volume control on smart clothes capable of playing music.

Many of these reinvented everyday items also come with a way to power themselves. The electronic clothes and paper keyboard self-power just by being worn or pressed by the user, thanks to the embedding of nano-sized energy generators that safely harvest electricity produced from mechanical movement of the wearer.

Each of Martinez’s inventions not only enhances commonly used objects but also prevents or treats disease. The electronic clothes repel bacteria and stains, for example, and dirt and dust on the paper keyboard can be easily wiped away.

“Most of my research is focused on expanding the general public’s access to biomedical technology,” Martinez said. “I find it really disappointing that we are in the 2020s, and you still have to go to a doctor because there are no serious diagnostic tools that you can use at home. Many patients who can’t afford a doctor’s visit wait too long, and when they finally go because it’s then really obvious that something is wrong, the treatment is more expensive.”

On the way to achieving better self-diagnostic tools, Martinez’s lab has addressed challenges in using sensor technology that can track biometrics such as heart rate, hydration level and temperature as a sticker on the skin. Martinez and his collaborators have developed ways to make these stickers self-powered, easy to fabricate at low cost and capable of wirelessly sending data in real time to a smartphone.

Martinez also is paving the way for technology that may become common at home in the future, such as caregiving robots. In 2019, Martinez’s lab developed a method for efficiently 3D printing soft robots with human-like hands, as opposed to hard claw grippers that children and the elderly would be less likely to trust.

“To enhance collaboration between humans and robots, the technology needs to be intrinsically safe. If the materials aren’t compliant with what humans are expecting when they see and feel hands, for example, then they aren’t going to work with those robots,” Martinez said.

Martinez’s inventions have patents filed through the Purdue Research Foundation Office of Technology Commercialisation. The research is financially supported by Purdue University.

FlexiLab at Purdue University is trying to make the Internet of Things more practical for everyday use by addressing the limitations which have prevented it from growing in home environments. The aim is to develop seamless communication between humans, machines and household items. For example, FlexiLab is printing electronics the way newspapers are printed.
Smart Textiles