Smartmedic with KTU produce 'buddy' to save lives 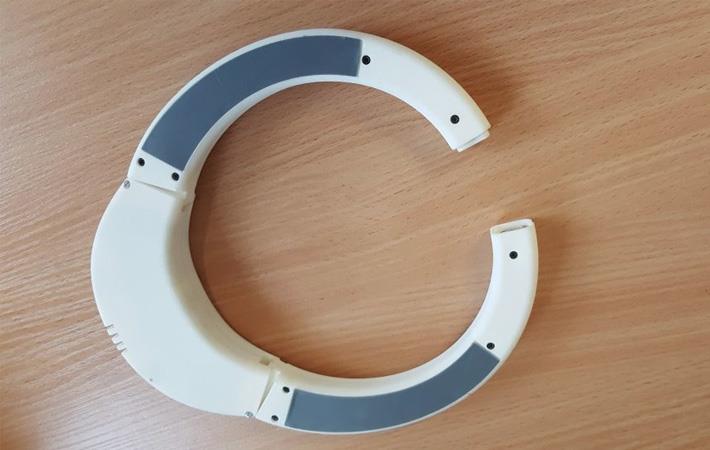 Courtesy: Kaunas University of Technology
The startup company, Smartmedic, together with scientists at the Kaunas University of Technology (KTU), Lithuania have produced a smart life-collar prototype which inflates in contact with water, thus keeping the head of its wearer above the surface. Buddy, the Life-Collar can save lives and may be vital for parents of young children, not confident in water.

Drowning is one of the most often causes of accidental death among small children (1–4 years). Around five thousand children drown in Europe every year. This mostly happens in lakes and rivers, and parents’ supervision is not always sufficient means of protection.

“Our smart life-collar is working similarly like an airbag in a car. Once the sensor installed into the collar touches the water, it activates the release mechanism, which fully inflates the airbags in 3-4 seconds, and they lift the wearer into the surface of the water. The head of the swimmer is kept over the water and he or she cannot drown,” says Tadas Juknius, the author of the idea.

The first functioning prototype of Buddy, the Life-Collar was created by Tadas Juknius in Smartmedic company, then PhD student at KTU. Later, working together with researchers of KTU Faculty of Mechanical Engineering and Design – Valdas Grigaliunas and Algis Karpavicius – Juknius developed and improved the prototype.

Buddy, the Life-Collar weighs approximately 120 grams, the weight of a cell phone. It is worn around the neck, and the accessory doesn’t restrict movements of a child. It is made from high-tech materials meant for long term usage. Once in water the collar inflates itself in 3 seconds, which is an optimal speed for protecting the child from injuries and being efficient in saving life.

“We have introduced our prototype in international fairs, and received very positive reviews. The next stage is designing a prototype for mass production,” says Kristina Judine, head of the company Smartmedic, which is a commercialisation partner of Buddy. (SV)