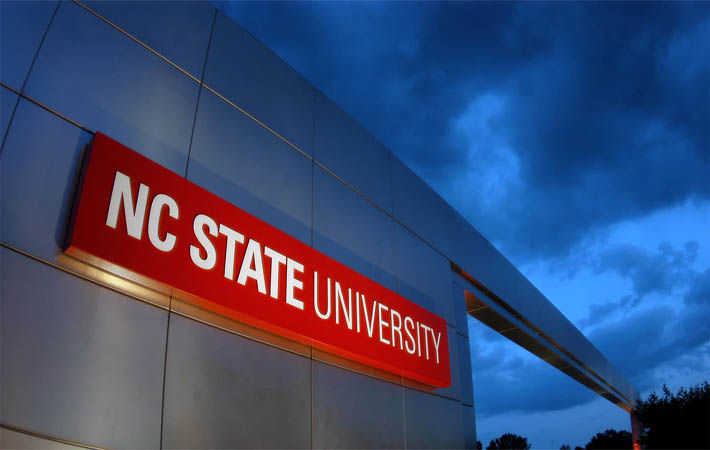 Pic: North Carolina State University
Scientists from the US, Australia and South Korea have developed a new way to deposit metal coating on fabrics and shown that the coating adhered more strongly to fabric than some conventional metal coatings, and eradicated 99 per cent of several common microbes within five minutes. They used liquid gallium to create the antiviral and antimicrobial coating. It was also tested on facemasks.

“Microbes can survive on the fabrics hospitals use for bedding, clothing and face masks for a long time,” says Michael Dickey, Camille & Henry Dreyfus Professor of Chemical and Biomolecular Engineering at North Carolina State University, involved in the research. “Metallic surface coatings such as copper or silver are an effective way to eradicate these pathogens, but many metal particle coating technologies have issues such as non-uniformity, processing complexity, or poor adhesion.”

Dickey and colleagues from NC State, Sungkyunkwan University (SKKU) in Korea and RMIT University in Australia carried out the work to develop a simple, cost-effective way to deposit metal coatings on fabric. The research has been published in Advanced Materials and is supported by the National Research Foundation of Korea.

Scientists from the US, Australia and South Korea have developed a new way to deposit metal coating on fabrics and shown that the coating adhered more strongly to fabric than some conventional metal coatings, and eradicated 99 per cent of several common microbes within five minutes. They used liquid gallium to create the antiviral and antimicrobial coating.

The team placed liquid gallium (Ga) into an ethanol solution and used sound waves – a process known as sonication – to create Ga nanoparticles. The nanoparticle solution was then spray coated onto the fabric. Ga adhered to the fibres as the ethanol evaporated.

The Ga-coated fabric was then dipped into a copper sulfate solution, creating a spontaneous galvanic replacement reaction. The reaction deposits copper onto the fabric, creating a coating of liquid metal copper alloy nanoparticles.

To test the coated fabric’s antimicrobial properties, the team exposed the fabric to three common microbes - Staphylococcus aureus, Escherichia coli, and Candida albicans. These microbes grow aggressively on non-coated fabrics. The copper alloy-coated fabric eradicated over 99 per cent of the pathogens within five minutes, which was significantly more effective than samples coated with only copper.

The team worked with Elisa Crisci, assistant professor of virology at NC State, and Frank Scholle, associate professor of biological sciences at NC State, to show that the coatings also work against viruses. The coatings were tested against human influenza (H1N1) and coronavirus (HCoV 229E, which is in the same family as SARS-CoV-2). The coatings eradicated the viruses after five minutes.

“This is a better method for generating metal coatings of fabrics, particularly for antimicrobial applications, both in terms of adhesion and antimicrobial performance,” says Ki Yoon Kwon, postdoctoral associate at SKKU and first author of the research.

“It could also work with metals other than copper, such as silver,” says Tae-il Kim, co-corresponding author of the research and professor at SKKU. “It is also a simple method, which should be relatively straightforward to scale up for mass production.”